Four months of 2019 are in the history books and investors should be delighted, as January, February, March, and April were each positive performance experiences.  The cumulative result is a total return exceeding +18% for the S&P500 index.  That’s well ahead of the average January to April return of +3.7% over the past 25 years, and is an attractive return for most full years.  A “4-peat” is rare, but not unprecedented with 2019 notching the 16th observation since 1950. The other 15 historical occurrences went on to provide an additional +10% average return for the final 8 months of the year, though there was usually a pullback (-8% on average) along the way.  The S&P500 index added +4% during April boosting the strong 1Q returns.  Client portfolios continued their advance, as both stocks and bonds provided positive returns.

Briefly, let’s review some other market stats along with what happened next:

Historical data also reveals there is often a pause, a slowdown in the upward trajectory of the market 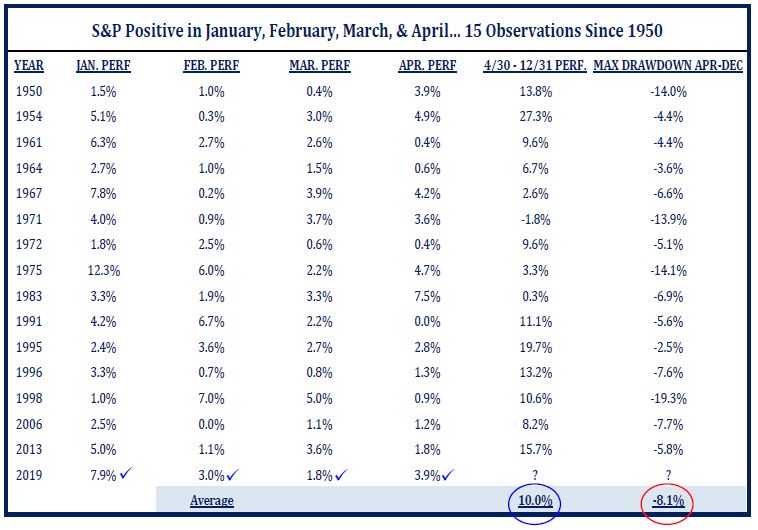 immediately following a strong rise.  Of course, it’s difficult enough to forecast the direction of the market over one time frame, much less two or more.  But history favors further gains.

We must also be mindful that each successive month this Bull market advances, it continues to establish new duration history.  At 122 months old, it surpassed the 10-year bull market that ended in 2000 when the tech-bubble burst.  The average bull market lasts 60 months (5 years).  Yet, the current Bull market does not/will not need to “die of old age”.  That’s because underlying economic fundamentals appear supportive for it to continue.  Barring some policy mistake (Fed raises interest rates further or too much; they are currently on pause and reason for the early 2019 rebound) or tariff negotiations with China are prolonged (seems currently unlikely), this bull market should continue.

We continue to believe the global economic path forward is good, and it is important for Europe and Japan to hold together in 2019, as the US & China improve and drive global growth.  Recent data shows Europe is steady, and Japan data is okay.  Both the ECB and BoJ (monetary authorities) are following supportive easy money policies.  That leaves the US and China as key

swing factors.  The surprise domestic GDP rise in 1Q2019 demonstrates (once again) that recession concerns earlier in the year were overblown.  Additionally, growth occurred without inflation rising.  China too is trying to boost its economic growth following a slow-patch last year.  US-China tariff talk does pose uncertainty for business leaders (here, China, Europe and Japan), which is causing them to follow a cautious outlook about growth prospects.  A tariff resolution would likely resolve this cautious approach.

Summarizing, the US economy is on solid footing, and the global economy appears moderate.  Monetary policies are generally accommodative or supportive, because inflation is tame.  This backdrop, we believe is supportive of the Bull market continuing its advance.  But the stock market is no longer inexpensive like it was on Christmas Eve.

We continue to invest portfolios pursuant to client established investment objectives (stock/bond mix) with awareness to market valuation. We are pursuing a “dialed down” risk strategy in both the stock and bond allocations.  That’s because while valuations are not exuberant or “irrationally exuberant”, they do appear full.  Additionally, remember the age of the current bull market.  We want portfolios to participate as the Bull continues to run, while also managing risk given its age relative to history.  Risk is “dialed down” via owning shorter and better quality bonds, and lower by owning greater exposures to value versus growth and large versus smaller stocks.  International stock valuations continue to look better relative to domestic.

In baseball, a batter with a 4-hit game would be excited about his success.  A football team would be encouraged with 4 consecutive wins to start its season.  Consecutive successes can lead to “over confidence” attitudes relating to what to expect about the future.  Overconfidence causes some to assume greater risk because of recent past success; they can become complacent.  Yet, many know from experience that slowdowns or setbacks can occur following consecutive strong performances.  Players know they are only as good as their next at-bat and their next game performance.

Did you know?  The average growth rate of the US economy over the past 80 years (1939 -2018) is +3.6% per year.  Yet the actual growth rate for the US economy only reached that pace or greater one time in the last 18 years, in 2004.  The recently announced 1Q2019 GDP growth was +3.2%, and attractive compared to expectation.  May 1st is the 119th month (since July 2009) of the current US economic advance with low inflation.  That’s good because this expansion will soon become the longest running (at 10 years old) in June.  And, it may not be as late cycle as some think.  That supports the current Bull market.  In the short term, the recent 4-month (4-hit, 4-win) pace may take a “breather” and settle into a more historical path.  Yet, to derive future success, one needs to keep swinging the bat, playing the game, and staying invested.

Printer-Friendly PDF can be downloaded here: “4 For 4?”