The current global trade war concern first emerged 18 months ago; as recent as May it was generally believed a US/China trade deal could be negotiated.  That deal on paper was reportedly 80% complete.  At the same time, some trade progress occurred elsewhere (USMCA/NAFTA 2.0), but the US/China negotiations are unfinished and appear virtually collapsed.  One even wonders if a US/China deal can resolve before the next US presidential election in 2020.  The reality is China does not feel the same political urgency and is unlikely to back down quickly, instead they favor projecting a tough image.  That means more economic pain will probably occur before meaningful talks resume.  A major issue – Intellectual properties protection – is a complex subject to be resolved.  In essence, it appears we are in the throes of a “New Cold War” with potential big influences on the domestic and global economic and financial outlook.

Recent price action of stocks during August was volatile, attributed to the back/forth volley between China and the US on tariffs/trade.  During the month, the stock market produced 18 days with moves of more than ±1% (11 of which were negative); a lot compared to recent years.  The news headlines are nasty and likely to remain bumpy; the markets smell a geopolitical landscape on fire.  Tariff issues are moving from an economic/trade issue to a national security debate (“international companies with manufacturing in China should find other locations and consider moving back to the USA”).  The tariff volley proves that “tariffs can shake the market” and ongoing turmoil requires investors remain data driven to monitor the viability of the current Bull Market.

Most stock market sectors experienced their worst August performance in years.  US investors rotated into more defensive assets, such as high dividend-paying stocks and US Treasury bonds.  Stock fund outflows during the month exceeded $23B, the largest single monthly outflow in many years.  US investors fled areas they considered vulnerable to a long list of macro concerns – trade/tariffs, China, yield curve inversion and recession, Brexit, the strong US $, Argentina, and etc.  These topics pulled the S&P500 down -1.6% for the month (though it was off as much as -4.5% at a couple points).  The lingering tariff issue advances a deflationary worry that both domestic and global economic growth will stall.

Note: comments above were about US investor fund flows from stocks to safer asset types.  But during August, foreign investors pumped money into US stocks and bonds at the fastest pace in a year – roughly $27B into stocks + $37B into Treasury bonds.  Why?  Foreign investors see their sovereign and corporate bonds offering negative interest rates (yields).  If needing to choose between owning a 10-year German government bond yielding a negative interest rate (below 0%) or a 10-year US Treasury bond at 1.5%, which would you select?  The US Treasury yield is among the highest available for a safe bond from a developed financial market.  Negative yields on many sovereign bonds make Treasuries very attractive (see Global Rate Matrix below).  At the same time, the US stock market is up over +18% for the YTD versus the world stock market rising +5%.  Foreign investors are buying into safety and a US market that looks more healthy than elsewhere.  Who’s correct – US investors fleeing the stock market, or foreign investors buying?  US 10-year Treasuries at 1.5% are high yielding compared to other negative yielding foreign bonds, BUT expensive compared to January when they yielded 2.5%.  That’s a big rally in bond prices (as yields drop, prices rise).  Bonds are a tricky investment asset class to invest in.  A contrarian investor would argue foreign looks cheap relative to US (domestic); and the move in bonds is extreme.

Perhaps providing this context helps investors understand why the US president is “yelling” about Fed monetary policy being too tight and hurting the tariff negotiation process?  The current inverted yield curve (short-maturity bonds yield more than longer-maturity bonds) suggests a policy mistake is being made – interest rates are too high for the economic backdrop (which includes a trade-war).  History reveals that when an inverted yield curve exists for a while, that a recession could occur between 12 months and 3 years in the future if action is not taken to remedy tight monetary conditions.  The Fed is behind (trailing) the market (observe below US short-term rates higher than long-term rates, red ovals); it also appears the Fed is “afraid” of the market’s reaction if they do not act by lowering rates. 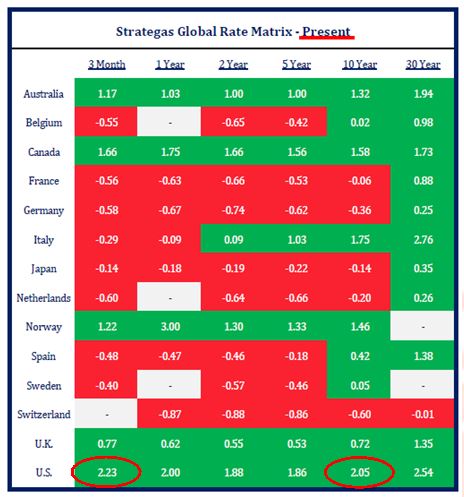 Not condoning the president’s methodologies, the reality is US interest rates are the highest in the developed world.  As foreign investors pump money into the US to buy bonds/stocks (propping up the financial markets), the US dollar is appreciating (due to the demand).  That makes the sale of US products overseas more difficult, and potentially slows US economic growth.  “Hey Fed, you are too tight for a lingering tariff battle!”  While the Fed didn’t choose the trade battle, we know that “interest rates can kill the economy.”  Other foreign central bankers offering negative interest rate bonds (the amount of negative yields keeps expanding) is creating a “race to the bottom”.  Meaning, the faster they can lower their interest rates and currency value (as they maintain negative interest rates while the US Fed maintains “high” rates), they hope to boost their economic prospects.  “Currency Manipulator” is a label applied to another country which manipulates interest rates and currency to aid their own economic prospects at the sake of others.  China’s recent response in the early August tariff volley was its attempt to allow the Yuan value to drop quickly and thereby boost its economic situation verses others.  These are the weapons being used in the “New Cold War” of economics.

What do negative interest rates, and a 10-year US Treasury yield at 1.5% suggest for investing in the near term?  Against this backdrop, yield-bearing investments are coveted.  If the Fed wants to slow the foreign demand for Treasuries, then they should lower interest rates.  Consider too, that more than 50% of the stocks in the S&P index offer a dividend yield higher than 1.5%.  Plus, many stocks provide a growing dividend; these good quality investments are cheaper than FAANG and most growth stocks while offering better down-market protection.  The “TINA effect” (meaning There Is No Alternative) may be resurrecting itself again – because high stock yields exist in a low-yield bond world, which includes zero and negative interest rates.  Stocks may be the best alternative, the “TINA” asset, in a low-yielding bond world.  Keep in mind, investing in bond world is very tough because of low yields.

Tariff issues between US/CN will take time to resolve.  Monitoring domestic and global economic developments, including the Fed and interest rate policy, are important to the continuance of the current Bull Market (now 126 months old; oldest ever in US history).  A still healthy US consumer (representing 67% of domestic growth) is carrying the load; watch for cracks in their outlook.  The difficult challenge, is determining if this “cold war” will deteriorate into a longer term change in economic and market trend because of policy mistake(s).  At this time, there is scant evidence that the US economy is headed for a recession; but be watchful.

We are managing portfolios with the expectation that the current Bull Market can run further.  That means we are investing portfolios pursuant to a client’s established investment objective (asset mix to stocks/bonds).  But we are mindful about the age of the current Bull Market and macro concerns.  Thus, for over a year, we are “dialing down” risk – owning simple bond fund strategies, and emphasizing stocks with better valuations (including better dividend growth and yield).  Risk management involves dialing down risk as concerns and uncertainty rise.  It means portfolios will continue to advance as the markets do, and decline less if/as the market does; moving either up/down more slowly than the market.

Challenging times worry investors.  We write these commentaries to offer investment perspective about them.  You are encouraged to contact us to discuss any thoughts or worries. 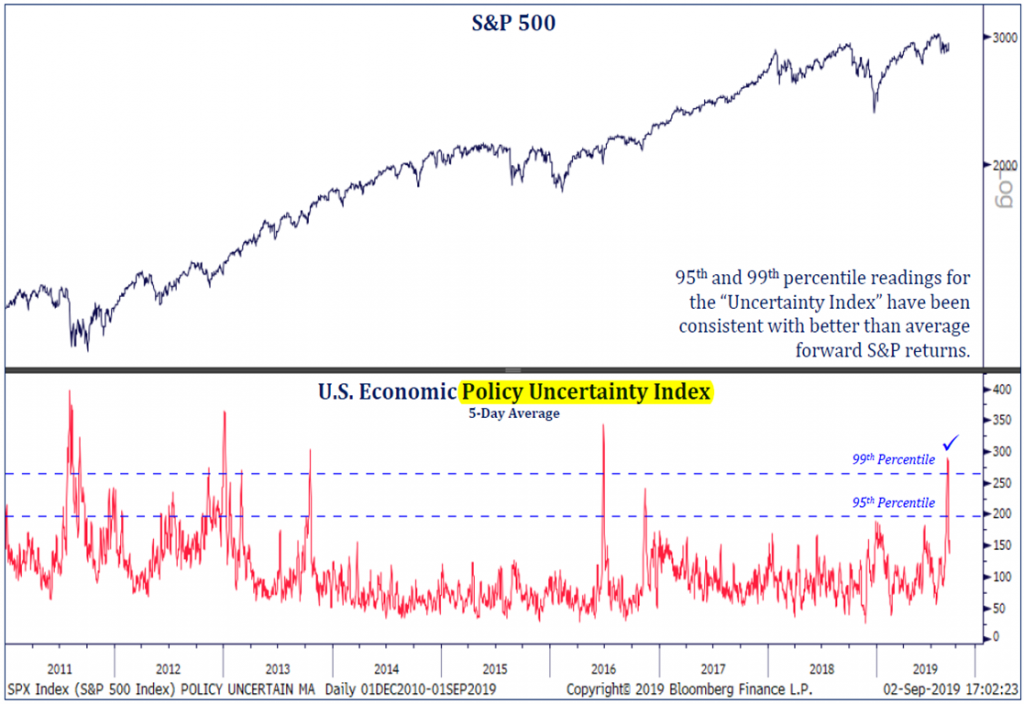