Almost as quick as the calendar flipped to August, the market’s backdrop and investor sentiment was altered.  Just two weeks ago, the Fed made good on months of more dovish rhetoric by cutting its target for short-term interest rates by a quarter of one percent (25 bps).  While some watchers were pining for a more aggressive move, the adjustment seemed all that was warranted given a stock market near all-time highs, low levels of unemployment, and trade talks between the US and China that were reportedly making progress following a late-June G20 meeting between Trump and Xi.  But with a newspaper article and harsh tweet from Trump that fresh additional tariffs would be levied against China, the Fed’s easing move suddenly felt inadequate and behind the curve.  Tensions between the US and China are again heightened, and some are calling the process of negotiation all but collapsed as China allowed their currency to depreciate in retaliation and appears to be slow-walking/stalling the process.  They in no way seem urgent to strike a deal even as their economy is showing signs of stress as a result of tariffs.  Chinese leaders instead appear of the perspective that in the “long-game”, a weakened global and US economy hurts Trump’s chance of re-election in 2020 – and their odds of a more favorable “deal” are higher when considering the stated positions of Democratic party hopefuls.

From a fundamentals perspective, trade is the primary focus at the moment but seems unlikely to resolve swiftly.  2Q earnings season, now winding down, came in not as soft as feared with 75% beating expectations and a blended decline from last quarter of just -0.7% (well shy of the -2% contraction the street was estimating coming into the season).  Meantime, the 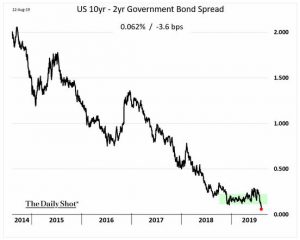 US economy remains in positive growth-territory overall (not recession) while more than $14 trillion of government debt around the world now sporting negative yields (meaning buyers are essentially paying foreign governments to store their money – and getting back less than they paid).  Germany’s entire bond yield curve (all the way out to 30 years) are negative yielding!  This once inconceivable phenomenon is so prevalent at the moment that it is dragging down US government bond yields as those investors opt to buy US Treasuries as opposed to their own government debt.  The effects are several: with US yields being tugged lower by foreign demand, the US dollar is strengthening further, and the yield curve is becoming inverted across longer maturities.  The most notable of those spreads, the 2yr vs. 10 yr is spread is now very narrow (see chart).  That maturity spread is significant because it is widely viewed as a leading indicator of economic recession.  Short rates being higher than longer maturity rates is crystal clear evidence that the Fed is too tight for the current economic conditions and/or an extended trade war.

In the short run, it seems increasingly probable that the US yield curve will experience some sort of inversion.  Should that occur, we suspect computer/algorithmic selling might kick in leading to more pain for “riskier” asset classes such as stocks, corporate debt, and the like.  Historically a yield curve inversion has a compelling track record of predicting recession; on average recession occurred 12-18 months after the inversion.  This is not to suggest that investors must panic, but it does strongly dictate that the Fed cannot be patient in further reducing key interest rate targets to align itself with the market backdrop or something will break.  The US has experienced a very flat but not inverted period before – in 1994-98 – and resulted in an extremely strong run for risk assets during that time.  While the cycle is long, that possibility is not small considering eyes in the US and around the globe are watching these well-known issues and do not desire to send economies into recession.  Most important, the fact that the S&P500 as a whole sports a dividend yield that exceeds what an investor can earn in treasuries makes stocks the more attractive asset class and should be a buy signal for investors (not necessarily short-term traders).  Those who can remain disciplined and focus on the liquidity and flexibility their portfolios already have built in, can weather any short-term selling or market swoons.