Happy New Year, and new decade!  Time flies – just twelve months ago investors entered 2019 questioning whether the bull-market might be dead following a relentless and jarring 4Q’18 decline coupled with anxiety that the Federal Reserve would continue pursuing step-like rate increases despite rising uncertainty related to trade and tariffs.  At that time, who would guess that the year would provide the most attractive full-year market performance in over 6 years?!

In this quarter’s update, “Hindsight is 2020” provides a quick recap of the recent year, but more significantly why it is so important to battle temptation to invest based upon short-term worries or negative headlines alone.  Continuing, “2020 Vision” [bear with us as we enjoy the easy puns available this calendar year] discusses the key themes we’re focused on this year and how those shape our expectations/forecast for the broad economy and investment markets in the upcoming year.  Among the themes are a Fed that appears on-hold; the Money Supply (M2); international economic fundamentals and investing opportunity; bond markets; and a US Presidential election year.  Lastly, “Sparks Start Fires” offers quick thoughts on escalating middle-east tensions and how these geopolitical uncertainties may cause market jitters in the short term.

The printer-friendly version of these newsletter articles can be obtained here: Nvest Nsights – Q4 ’19 Newsletter.

Also included in the newsletter (and posted separately here), our personal finance topic this quarter overviews the recently passed The SECURE Act and broad implications for both owners and beneficiaries of retirement accounts.

Where were you on New Year’s Eve December 31, 1999?  If you were like many people all over the world, your New Year’s Eve celebration was overshadowed by the looming fear that the world we knew might come to an end a few seconds after midnight.  Recall, the big fear was the Y2K computer crisis.  On the eve of a new millennium, no one knew for sure what would happen with calendars in computers because computer code for the year 2000 was “00”.  If dates were MMDDYY, would computers think the code 010100 was January 1, 2000 or January 1, 1900?  Would computers around the world lose their collective minds?  Further, would trains, planes, power plants fail; would computer records for bank accounts become inaccurate?  The year 2000 is the only turn-of-the-millennium any living today could experience.  As we know, this event 20 years ago moved forward without screeching to a halt.

Twelve months ago, on New Year’s Eve 2018, who would guess 2019 financial markets would be spectacular?  Investors just experienced a 4Q decline of near -20% which erased the 2018 stock returns to a full year loss of -4.4%.  The global economy was weakening; stocks, bonds and commodities were falling in tandem, and investors were worried.  Fear centered on the thought that rate increases by the Fed and tariffs would produce a protracted downturn; these were negative influences for the 2019 investment outlook.  The mood was unsettling and dim.  Twelve months later, investors now know 2019 stock market performance was very strong; producing a total return exceeding +31%.  While the US markets were the strong global performer, most all world stock markets provided exciting experiences.

Hindsight is 2020!  2019 was very encouraging to investors who remained invested; didn’t jump out after the big discomfort in 4Q2018.  Guess if you would, how well the US stock market performed during the 10 years just ended?  The annualized return for the S&P500 over these past 10 years was +13.6%.  That is one of the best stretches ever.  It may be difficult to match for the upcoming decade.  As you know, this longest running Bull market (130 months or 2 months shy of 11 years) was clearly unloved; not believed in.  Some investors never returned to risk investing following the financial troubles of 2008-09.  Leadership during the last decade was provided by a few FAANG stocks, private equity, and Passive Index investing – these ideas were much loved.  Banks, energy, Japan and Active management were disliked.  One hedge fund manager stated, the “best energy investor he knew owned tech stocks.”  History also shows decades often come in pairs, but with changes in leadership.  Something is sure to change; it always does.

The important point – being wholly committed to investing creates unanticipated rewards.  No investor can anticipate the future.  One needs to be invested all the time.  In hindsight, if an investor missed 2019, that is a big lost-opportunity.  What difference does one week make?  Missing one week – from Christmas eve 2018 to New Year’s Eve (12/31/2018) when stocks started the 2019 advance – resulted in a lesser stock market return exceeding +8%; returns for the past 53 weeks were +40.3% versus 52 weeks of 2019 were +31.5%.  Amazing how missing 4 trading days can significantly alter the performance experience.  And we know hindsight is always 2020!

Popular Mechanics magazine often showed futuristic ideas, like a man pushing a small, yellow helicopter into the garage of his modest home.  Within a few years, it was suspected that whirlybirds would replace cars.  Thomas Edison was one of the greatest inventors in history, but when it came to the future, he got a few things wrong.  In 1911, he predicted bars of gold would be as common and cheap as bars of iron or blocks of steel.  “Great ocean liners would be made of solid gold and we would be riding in golden taxicabs.”

What financial market outlook for 2020 should be considered?  Can some vision be offered regarding investing in the New Year?

First, we do not anticipate 2020 financial market performance to be robust like 2019.  We anticipate decent stock returns because the economy will do okay.  Dr. Ed Yardini, 40+ year economist and strategist, offered a New Year outlook, “the numbers 2020 mean: 2% real GDP growth, zero chance of recession, while inflation remains below 2.0% (in a coma).”  With this scenario, the Fed will not likely make changes to its monetary policy – not cut or raise rates.  The fiscal policy should remain accommodative in a presidential and congressional election year.  Tariff issues with China, in Phase 1 will complete, and further trade issue negotiations seem unlikely due to domestic political events.  In general, the current Bull market does not exhibit “irrational exuberance;” asset values are not cheap either.

Second, money supply (M2) grew faster than the economy and company earnings in 2019; M2 growth was largely responsible for stocks preforming so well last year.  When there is excess money that is not needed to finance the growth of the economy, it is typically absorbed into financial markets and boosts asset values.  If the economy grows a bit faster in 2020 (than 2019) – because tariff issues are “quiet”, global monetary policies are accommodative, and fiscal policy is supportive – then excess money supply will be used to finance economic growth.  In 2020, it seems excess M2 will be less and is unlikely to boost asset prices, as the economy will consume money to finance growth.  Thus, stock returns will likely be more dependent on company earnings and growth of the domestic and world economies.  This is another reason why stock returns may be decent, but not robust (like 2019).

Third, foreign and European stock markets may outperform US stocks.  If Europe was the biggest loser in the tariff/trade issue between the US and China, it probably has the most to gain with tensions easing.  Europe was hit especially hard as it was caught in the crossfire while Brexit was ongoing.  Now, both tariffs and Brexit are resolving.  It’s like exiting an economic recession.  Additionally, the valuation difference between US & European equities is close to as wide as in 2012.  The biggest difference today versus a year ago is improvement in the foreign economic outlook.  That may translate into global and European stocks performing better than US markets in 2020.

Fourth, bond performance will be similar to interest rates; bonds will earn their yield, not much more.  With inflation managed or subdued and the economy slowly growing, the Fed will not feel pressure to make major adjustments to monetary policy.  The Fed will likely monitor workers’ wage increases, as recent data shows the average workers’ wages grew faster than supervisors/management in 2019.  If wage rates accelerate due to full employment levels, monetary policy adjustments could occur.

Fifth (last), 2020 is a presidential election year.  Stock market performance is usually subdued during the late spring and summer of a presidential election year.  Yet after that, the stock market is historically uncanny in identifying the winning candidate before Election Day.  The act of Impeachment serves as an opening act to what promises to be the wildest presidential election of our lifetime.  Buffalo Springfield’s song, “For What It’s Worth” included a short phrase that seems politically appropriate – “Nobody’s right, if everybody’s wrong.”  Is that true, or not?  This year should be politically wild.

2020 vision may be possible for a while after visiting your optometrist.  But please, don’t expect that 2020 means economic and market predictions will be perfect.  We suspect the combo of low interest rates and cooling trade tensions will help sustain the current Bull market advance a while longer.

“A single spark can start a prairie fire.”  As we prepare this year-end Nvest Nsights newsletter, a US drone strike killed a powerful Iranian general in Iraq (foreign soil).  This is a major escalation event to which financial markets, and oil in particular, will react.  Whether right or wrong, together we will travel its influence on financial markets in early 2020.

For years, the US and Iran engaged in a proxy fight.  If the tables were turned and an American general was killed by Iran, we would expect direct confrontation.  Former National Security Advisor John Bolton quit (was fired) last year over Trump’s dovish position on Iran; Bolton believed more direct responses to Iran were appropriate.  Attacking the US Embassy in Baghdad, Iraq (foreign soil) by Iran-backed Shiite militias a few days earlier was the last straw given events of 1979 and Benghazi.  Iran’s General Soleimani was labeled in 2007 under the Obama administration as a terrorist military leader.  Iran’s general regularly “poked” at the US and/or regional allies to provoke a response.  The US expected more attacks and thereby determined a response at this time was appropriate.  There should be little surprise in the US response, yet the speed and type of retaliation was unanticipated.

Short-term impacts:  1) Iran will likely target US interests and allies; 2) other bad actors may see this as an opportunity to target US interests; 3) US will increase military forces in the Middle East; 4) higher oil prices (like a tax) could start to hurt US consumers and raise inflation expectations (which may lead the Fed to alter their steady monetary policy toward tightening) despite the US being less dependent on foreign oil; and 5) increased military spending would support domestic economic growth.  The great uncertainty revolves around how long retaliatory actions run.  In the short term, financial markets will likely be on edge.

Our portfolio strategy, or tactics, incorporate “dialed-down” risk in both bond and stock exposures, while pursuing the client’s account investment objective.  We are not trying to time the market; rather continue to invest per objective with risk dialed back.  We continue to pursue “time-in-the-market” investment philosophies because “timing the market” is very risky generating low-return experiences.

Most market strategists consider the current Bull market which began on March 9, 2009 to be 130 months old.  That makes it the longest bull market advance in US history.

With that in mind, others point to several uncomfortable pullbacks endured over this 10-year period when broad indexes like the S&P500 declined roughly -20% – the threshold for declaring a bear market underway (and conclusion of the bull).  With fundamentals suggesting odds of near-term recession again  low, some question whether the bull market is indeed as mature as the chart to the right suggests. 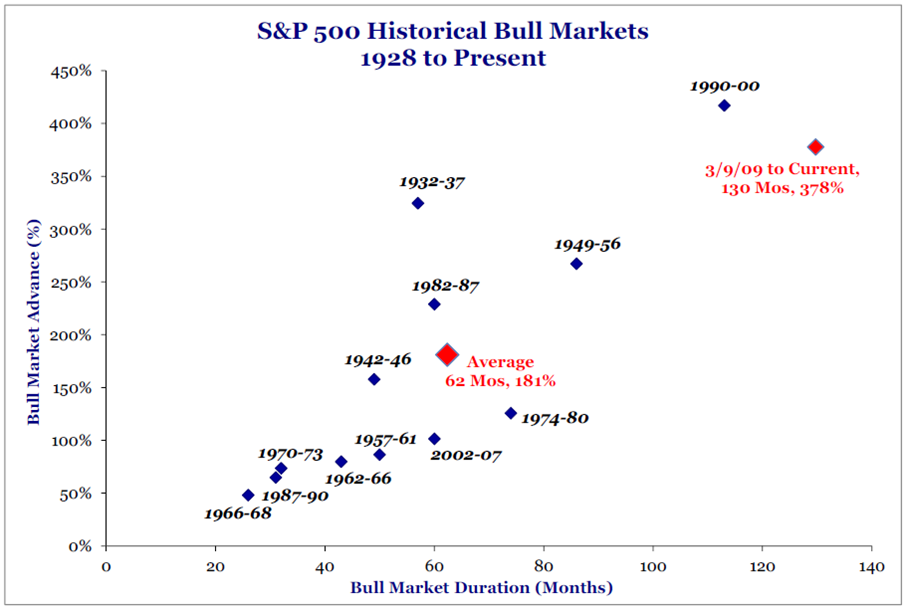