On the eve of Christmas 2019 and the passing of another decade, why was the stock market performance so strong this year when the economic backdrop was so soft?  How can stocks perform well when the economy is so worried about many things, including slow growth?  How many investment forecasters predicted this year’s strength when the 4Q selloff a year-ago almost ended the current Bull market run; or that the Fed would abandon its rate hike cycle and instead cut rates 3 times?  The financial markets always provide surprises which no one can time.

Through November, the S&P500 gained a surprising +27.6% YTD (total return).  That is nearly 3x the average annual return of +9.8% for the index over the last 50 years (1969-2018).  And, since December 24, 2018 (after the market declined -19.6% during 4Q), the S&P500 jumped +36.2% through the end of November.  The current Bull market is now 127 months (or 10.7 years) running; the longest advancing in US stock market history.  [One tidbit: if the 4Q18 market correction logged a -20% decline, many would be counting the current bull market as only 11 months old.  But, we’re still counting from 3/9/2009.]  November provided another positive monthly return with the average US stock fund rising +3.8% and the S&P establishing 11 new closing highs (bringing the total for YTD to 26).  Nine of the eleven months this year were positive experiences – only May and August were negative.  More investors appear to be thinking the worst is past and a better outlook is ahead.  A casual observer might think everything looks rosy and full of cheer!

Yet despite market strength, the US economy is growing slowly in 2019 and growth is stagnant in many areas of the world – Europe, China, and elsewhere for a variety of reasons.  The economic outlook does not call for much upside because business leaders are cautious making future investment or spending plans due to lingering uncertainties around tariffs and trade; these inactions constrain global and domestic economic growth.  The result – no boom and no recession; just a slow, muddle-thru experience in 2020.  Trade remains a topic of influence on the economy and central bank policy action (domestic and global).

So, why are stocks performing so well in 2019?  Is the strong market action linked to a truce or success in the tariff battle between US and China?  Yes; maybe some of the market strength relates to this expectation.  Investors also know that tariffs will shake – the markets and business confidence – new tariff threats in early December are again shaking everything.  But, there is a bigger reason for the markets surprising strength in 2019 which is not being discussed.  That is M2!! 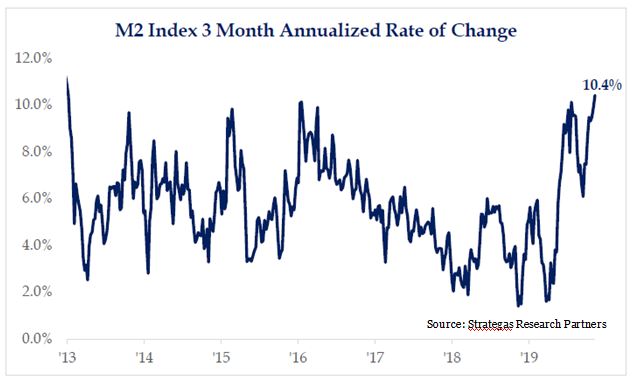 M2 is money supply, and it is growing in the US at an annual rate of +10.4% over the last 3 months (see chart on pg 2).  That is almost 3 times faster than the economy is growing.  When the economy is expanding stocks tend to respond in a counter-cyclical fashion; meaning they perform opposite of the speed of the economy.  Perhaps counter-intuitively, slower economic growth often leads to strong stock markets when the money supply is growing faster, because there is more money available than needed to finance economic growth.  The opposite is also often true: stronger economic growth soaks up liquidity that might otherwise be directed to financial assets.  When the economy is growing slowly, excess money moves into financial assets and boost their values.  Recall, the Fed announced in early January that it would pause its rate-hike actions of 2017-2018 as they monitored a domestic and global economic environment that was slowing due to tariffs.  Then starting in July, the Fed cut interest rates 3 times signaling the Fed desired to prevent economic deterioration from developing.  Other global central bankers are also providing monetary stimulus to the slow growth environment.  The domestic and global economies are not using all the M2 available.  So the excess money supply is boosting stock prices while providing a support to/for future economic growth.

Interesting too, 3 rate cuts in the middle of a broader economic recovery normally sets the market up for significant future returns.  In the past, when the Fed lowered rates 3 times or less as a “mid-cycle” adjustment, the stock market advanced +14% on average over the next several months.  Since the third rate cut on October 30, the S&P500 is up +3.3% (through November month-end).  Interesting that anything more than 3 rate cuts indicated widespread problems existed in the economy, and not surprisingly, the stock market generated almost no return.

Based upon historical averages, the Fed appears unlikely to hike rates again until 2021.  Since the 1980s, the average length of time between the first-rate cut and the next Fed hike is 571 days.  In the current cycle, the first cut was 7/30/19 and 571 days would suggest the first Fed hike maybe in February 2021.  Between the last cut and first hike, during that time, stocks advanced an average of +20%.  So, unless someone does something pretty goofy policy-wise, this current Bull market can continue.  In any case, it’s already a nice year for investors!

What about Impeachment hearings – what is their effect on stock market returns?  Unfortunately, there is not much historical precedent.  In general, impeachment hearings do not appear to affect the stock market much.  It only happened twice in American history – Presidents Andrew Johnson and Bill Clinton.  Neither of those times resulted in a President being removed from office.  More important to stocks is the underlying economic backdrop – economic growth is the bigger influence on stock returns during impeachment events.  In 1868, economic stats were not well recorded following the American Civil War.  During the Clinton impeachment hearings, stocks were unfazed because the economy was strong.  When President Nixon resigned in August 1974, stocks were already struggling because the economy was slow due to rapid rising oil prices and inflation rates.  Thus, the economy is the important ingredient that will influence the continuing Bull market advance.

A new decade – 2020 begins in a few days!!  It is also another presidential election year.  History shows, since 1928, the S&P500 gained +12.9% during election years when the sitting president ran for reelection.  Since 1928, the market gained +4.5% when the sitting president did not seek reelection.  So which political party is best for the markets?  A belief that one is better or worse because of which party wins, often discourages some from investing.  Call it “red” or “blue”, it’s actually more about you being invested than who wins.  Studies reveal it doesn’t matter whether a Republican or Democrat claims victory.  Understand it’s all about being invested from the beginning of an election year and looking 10 years down the road.  In 19 of 19 ten-year periods the performance experience was a positive return.  In 15 of the 19 ten-year intervals, an investor doubled their investment.  It is more important to invest regardless of who wins (some stocks/sectors will win and others may slip due to policy shift, but the market as a whole is less impacted); the key is to be invested.

One last stock market thought.  How does the S&P500 perform the year after a 20%+ gain?  Looking at 24 times wherein one year ended with a +20%-plus return, the next year averaged a gain of +13% nineteen times (79%).  Odds suggest investing is a good New Year option, particularly when economic conditions are slow and monetary policy is accommodative!

Lest this commentary reads too enthusiastic about the future of the current Bull market, we continue to invest with understanding this is a historically long run which will end one day.  A surprise event will eventually be the proverbial “straw that breaks the camel’s back.”  We don’t know when, but will continue monitor economic conditions and monetary policy closely.  We know from history that stocks beat bonds, often and by a lot.  That means remaining a “time-in-the-market” investor (not timin’ the market).  Yet, as we manage portfolios pursuant to the client’s chosen investment objective, we can adjust tactical strategy within stocks and bonds to lower or increased market sensitivity (risk).  Currently, risk is dialed lower than if the Bull market were early beginning.  The global markets do show areas of attractive valuation – Europe and Japan are cheaper valuation than US domestic; and value-style is cheaper than growth.  In bond world, yields remain below historical averages, so much caution is warranted – owning pure bonds and funds that focus on quality, instead of go-anywhere, do-anything bond funds (called unconstrained).  Now is not the time in general to get cute and fancy.  Rather it is best to continue investing via a disciplined process that worked for years through many market surprises.

Thank you for asking Nvest Wealth Strategies to invest your portfolios, and provide “LIVING LIFE” financial planning.  Our efforts are oriented to “delivering financial peace of mind.”  Merry Christmas and Happy New Year!!!