Does any investor believe the last week of fast-moving negative market action was reasonable?  Continuing our theme relating to seeing clearly with 2020 vision…. from our perspective, and many other research pieces we are receiving, indicates this past 7 days was “hysteria unmerited.”  It is mind boggling how many traders (not investors) display a “shoot first and ask questions later” mentality.  When one is unable to understand or is unable to quantify a concern, natural intuition reaction is “jump, and look later.” 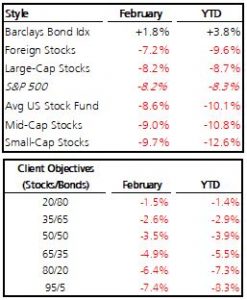 During the final 7 trading days of February, US stocks recorded their worst week since the 2008 financial crisis, entering correction territory with a -12.7% decline.  Not that investors desire  experiencing new records that are negative; yet this single week decline into correction territory is the fastest on record for the S&P500. [The worst single-day decline occurred on Black Monday October 19, 1987 – the Dow Jones Industrial Average plunged -22% and the S&P500 slid -18%.].  For the month of February and year-to-date, the S&P500 is down -8.3%. Client portfolios experienced declines in value too, as all sectors of the stock market dropped.  Only about 9% of stocks in the S&P500 did not slide below their 20-day lows.   Bonds provided the safety net, as price rises were big while yields dropped to historical lows.  Bonds are definitely THE most expensive asset class in portfolios and require careful management.  Even though investors feel better owning bonds and bond funds, record low yields at 1% for the 10-year Treasury (yield at year end was almost 2%; prices rise as yields fall) translates into a historically expensive asset class.

The indiscriminate selling during last week was extreme.  It is precipitated by hysteria in media headlines.  A sense of perspective is important – let’s briefly review the seriousness of the coronavirus, or COVID-19 situation.  The virus does exhibit high transmissibility compared to SARS.  But according to the World Health Organization, about 80% of those infected recover without needing special treatment; elderly and those with previous health/respiratory problems are more likely to develop more severe symptoms.  The global population is around 7.5 billion people of which 1.4 billion live in China.  In China, reported cases are about 85,000.  Doing the math, so far less than 0.01% of China’s population tested positive for COVID-19.  Outside of China, there are about 3,000 identified infections from a population of 6 billion, an infection rate of 0.00005%.  In the US, the numbers are even smaller.  There is of course a risk that the numbers grow rapidly to the extent that they become more meaningful.  So far the numbers are very small.  And of course the virus outbreak is a tragic loss of life. 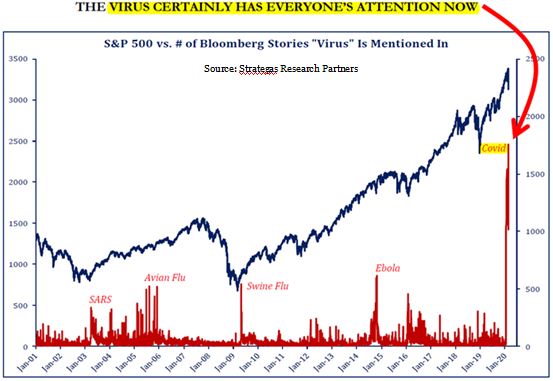 The financial markets are reacting in a manner suggesting the impact is more significant, because it is difficult to assess the drag of the virus on global and US economic growth.  It is unclear how to determine the extent of slowing that will occur.  Also uncertain is how long a slowing pace will prevail.  China is the factory to the world.  China’s “cure” to the virus was shutting down their economy, which is causing a sharp contraction there.  Workers (and consumers) are at home, and travel is limited.  The longer China’s factories are idle their effect on global supply-chains and the shipping/transportation system will create slower global economic conditions.  There are some who think the global economic impact will be significant.  But most believe it to be temporary with a “V”-shaped bounce-back developing.  If the world economy remains slow through 1Q and possibly through the first half of 2020, a meaningful bounce-back would seem unlikely before the second half of the year.  A contagion effect to other industries, like the energy sector in particular along with below 1% Treasury bonds suggest the global economic conditions will be sluggish for a while.  We should also carefully monitor the US consumer as it remains the workhorse for the US and global economies.  If US consumers pull back, the probability of recession rises.

The market reaction last week (of February) was quick and thoughtless; reckless and indiscriminate.  Certainly, price moves were downward to the extreme.  Following a strong performance in 2019 wherein valuations were stretched (some areas like FAANG stocks were arguably “exuberant”), the coronavirus was the perfect factor for risk-off trades.  Computer-driven/algorithmic trading very likely exaggerated the adverse reaction and volatility.  Last week’s sharp market decline quickly created 3 conditions supporting the idea that a tradeable low is taking shape: 1) price extremes are in place; 2) investor sentiment is stressed; and 3) signs of a coming liquidity wave are mounting.  The speed and magnitude of the decline is similar to some other declines; some technical market stats are hitting rare 95th percentile observations.  No one can claim with confidence that the low is complete, but the climactic phase of the drawdown (sell what you can; even safe is not safe) probably happened.  The tricky part is, knowing that past acute declines were often followed by re-testing or probing of lows in the days and weeks that follow.  Such action does more to chip-away at sentiment (investor mood) than the initial decline.  In other words, be aware that you may feel increasing emotion to bail out if/as the market may move up/down for a bit.  It is during this time, that an important element of putting in the low occurs.  Price and Time are two important elements of determining the recent February month-end low.

The third condition supporting a tradeable low taking shape is a wave of liquidity coming from global central bankers.  There were announcements from several central bankers – the Fed, the G-7 and including Banks of Japan, England, Canada, and Royal Bank of Australia – are considering coordinated action by cutting key interest rates.  They plan to take steps to reduce risks to economic growth and stabilize market reactions to coronavirus. [On Tuesday March 3, the Fed cut interest rates a big 0.5% to 1) show a willingness to respond the coronavirus and related slowing economic growth risks; and 2) curb the flow of foreign money into US bonds as a flight to safety, ultimately hurting US trade.]  China currency and interest rate markets already show significant action to provide monetary assistance to sagging economic conditions.  These actions could prove to be the “slingshot” action to advancing financial markets later this year.  Thus, recent market dislocations caused by coronavirus in particular is providing investment opportunity for long term investors.

Last question: what does history share about corrections turning into bear markets?  Looking at 11 stock market corrections since 1998 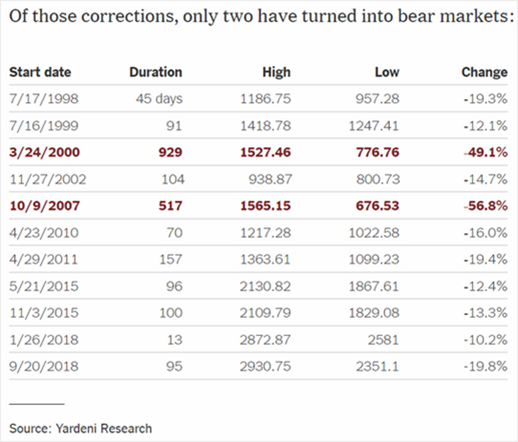 (correction is defined as a market decline of 10% or more), only two evolved into bear markets (defined as a -20% decline or more).  Those 2 bear market instances were 3/24/2000 (tech bubble) declining -49.1% over 929 days, and 10/9/2007 (financial crisis) declining -56.8% over 517 days.  The other nine correction events ranged from a -10.2% decline occurring during 13 days on 1/26/18 (first announcement of tariffs), and the most severe being a 95-day decline of -19.8% starting on 9/20/2018 and ending on Christmas Eve 2018 (Fed raising interest rates).  Will this 1-week decline slide into bear territory and end the current historical Bull market run of almost 11 years?  Hard to say, at this point; it all relates to IF the economy slips into a short recession, defined as 2 consecutive quarters of negative growth.  The fact that a number of key central bankers are poised to provide a wave of accommodative monetary policy support is most encouraging.  Governments want to prevent unmerited hysteria from spreading and instituting a worse global economic event.  It is hoped that coronavirus will prove to be a transitory bump to economic activity. Hopefully, this market correction process is a pause that refreshes the current Bull market to continue its historical advance.

If/as you may continue to be concerned about recent market action, please call us to share those thoughts.  We want to know how recent events are affecting your long-term investment perspective and goals.